One Big Idea: Hits from All Sides - The State of the NFL Brand 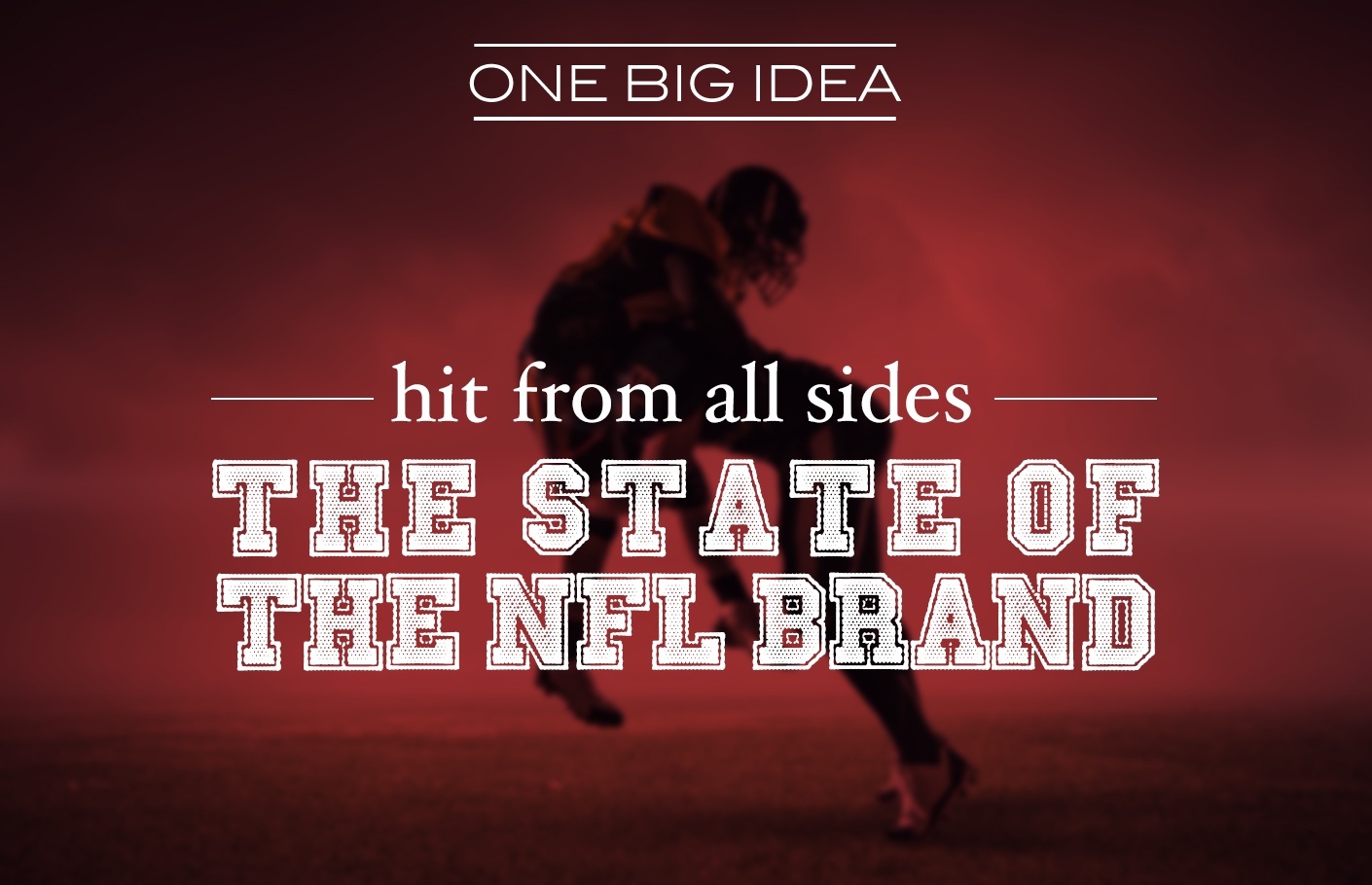 Much has been made of the NFL’s early season ratings drop and subsequent recovery, with explanations ranging from the situational to the fundamental. We take a look at the state of the NFL's brand and how cultural trends are shaping the future of the league. If you like our podcast, please subscribe and leave us a rating!

Bill Gullan: Greetings one and all. This is Real-World Branding. I'm Bill Gullan, President of Finch Brands, a premier boutique branding agency and this is One Big Idea. First of all, Happy New Year to you and yours. We were pretty quiet in this space in the late fall and into the holiday season as a result in part of our normal responsibilities with client work and growing the company and fulfilling our obligations and going as deep as we've promised to go when we help our clients build and grow strong and durable brands. As we move into the New Year, we're back and we hope that this podcast will become, and remain for some, a part of your week that's an entertaining and informative and all the rest.

I'm recording this on two afternoons I guess, one afternoon before the weekend starts that includes the NFL winnowing down to two teams that will compete in the Super Bowl in two weeks, a little over two weeks. This weekend are the conference championships and we’ve been thinking a lot about the NFL as a brand and as a cultural institution in our society.

This came up yet again, it always does, during the season. There's all sorts of dimensions to the NFL's business and, obviously, the governance of the league and discipline and franchises and all the different things that combined to create the overall NFL experience.

It came up last week as the Chargers were completing their move, yet another move to LA. We'll see how that all works out. The fact that the San Diego ballot measure that would've led to new stadium funding failed multiple times overwhelmingly, some have said, may signal some decline in influence as a whole for the league.

Much was made in the early season of the ratings drop which was primarily in, I believe, primetime games. There is a pretty significant ratings drop. Then there was a recovery. There's a lot of explanations that have been put forth ranging from things that were really more specific and situational to, so I'm thinking about some fundamental vulnerabilities. I mean the NFL is not in trouble by any means but there are some signs that it's cultural and entertainment hegemony and untouchability in the market, maybe on the wane in small but important ways.

There was, and most people seem to agree that there was, plenty of good reasons to attribute the rating's decline to factors that were specific and temporary. There was a ton of interest, obviously, in the presidential election which sucked up a lot of oxygen and steered traffic towards cable news. I think one of the games was actually on debate night. There's a lot of reasons why the election had a ton of impact on where people's attention was being turned. Also, the NFL did have a primetime slate that was fairly uninspiring. A lot of the matchups were not as good in practical, real life as they were on paper originally when planned.

There had been massive upheavals in the daily fantasy market as I believed those companies are planning to merge but with regulatory issues and other concerns that led daily fantasy which was a major advertiser the last few years as well as another way for people to engage with the sport, with that on the wane at least for now.

One could argue that there was some incentives to watch that we're removed. Also they have been many issues related to big name stars that were always heavily followed. Tom Brady was suspended, Peyton Manning retired, JJ Watt was injured, etc. Some of these people that have become staple icons of the league weren't as present as they have been. Those are reasons why some of that overall luster was removed at least in the early season.

Again, the ratings did bounce back. There is risk to the NFL amid a time of deep cultural, and political polarization. When we look at what happened in San Diego, when we look at the rating's decline and just a general zeitgeist here, the NFL seems and feels a little bit different than maybe it did even a couple of years ago.

There is a cultural divide in our nation as we certainly know but the NFL is receiving a bit of incoming fire from both sides of that. The cultural left in America has long had, maybe not long but at least for the last little while, there's been an undercurrent of an anti-NFL narrative and it goes something like this, ‘It's rich white owners who were lining their pockets and casting aside players often, players who come from difficult circumstances and risk a lot physically and otherwise to continue to play in the league. There's this old boys club that doesn't care about domestic violence. We had the Ray Rice situation and others.’

‘Then it steps up in symbolic ways with their Komen association which blankets the league in pink for a couple of weeks and then seems to go away.’ At least that's how the narrative goes. ‘These executives who covered up brain injury risks when they knew better and the science told them better. This league is tone deaf. There's a racist team name in Washington. There's an overall promotion of violence and tribal behavior on the part of fans and players.’ Football, the narrative goes, it's just a metaphor for war anyway and the only people who really care are these brainless bros wearing their colors, fighting in the parking lot and at the concession stands, etc.

That's the narrative that you hear and it's overly simplified, that you hear a little bit from Brooklyn and Berkeley, in other places where the cultural left is on the ascendancy and views this boys-will-be-boys type of sport and brand with a great deal of suspicion and ridicule.

On the right, the cultural right has also been up in arms. There's a boycott the NFL hashtag that has been making its way through the traditional conservative circles on Twitter. What seems new is this feeling of dislocation, whether it was Colin Kaepernick's anthem protest and all those others who were inspired by it. Last year's halftime performance was a very politics infused performance by Beyonce that generated a lot of attention on all sides.

The net effect is that it may seem to cultural conservatives that the NFL is providing a platform for causes with which they do not identify, and even something as seemingly important and also innocuous as some of the new rules around player safety and contact has been interpreted by some older school fans as this overall ‘wussification’ of the sport. ‘It's not the NFL I grew up with.’

The NFL is in a difficult spot here. This narrative from the left is not new but seems to be gaining some critical momentum as blogs and other information sources have been joined by many voices from across the spectrum and the geography. The left has that narrative but now the right has one.

There was a poll that was conducted by, I think it was Rasmussen and they're known as being a little bit right-leaning. When they asked folks why they weren't watching the NFL in the way that they had previously, the number one answer that was given at least was the Kaepernick anthem protest. While I think most observers don't believe that to be the primary reason for the rating's decline, there is certainly new pressure from the cultural right on the NFL.

The difficult spot here is that both sides of this divide have their knives out for the league a little bit. Not new territory for Major League Sports, the NBA has long tried to balance the empowerment and the general really progressive aesthetic, the expression of its athletes with sensibilities that might be a little bit more risk-averse on the part of sponsors and season ticket holders. The NFL has occupied this special place in our culture, it owns Sundays and Monday nights and other places of our weekly life. It was always a way to bring people together but there's evidence that right now maybe, and it's maybe reflective of what's just going on in our society, that it's also pulling apart.

The Super Bowl matchup will be clear in a couple of days. It's safe to say that this year's game will be accompanied by all the normal rituals. There'll be two cities that are extremely excited and hopefully. There'll be a lot of parties among those in between, a lot of fun critiques of the advertising approaches. There'll be a big halftime show with Lady Gaga.

This year I think, maybe now more than ever, the NFL is facing up to that same long-term cultural polarization that really represents and reflects our own divided America. The league, it's future, are subject to cross winds that we've seen politically and culturally. While this certainly doesn't equate to any short-term significant risk for the NFL, they have a brand management job ahead of them one that they also currently have.

Those are some thoughts. Enjoy the games this weekend and we'll sign off from the Cradle of Liberty.